Who are we? Brynn Jones and Jason Weber are the ‘J’ and ‘W’ in J/W Mariceuticals and its founders. One day, Brynn approached Darrin Fiddler and pitched a venture to make a better world. We were going to provide the nation with medical marijuana. Unfortunately, there were several hoops demanded by the Canadian Government’s MMPR program that put those plans on the backburner.
Fortunately, a backup plan was already in place. As the application took two years for approval, we planned to set up an on-line hemp food company at www.Mariceuticals.ca and www.OkanaganGreenHemp.com  with a house label called Okanagan Green. We developed a product focusing on the hemp seed and a brand highlighting the Okanagan Valley’s beautiful scenery. 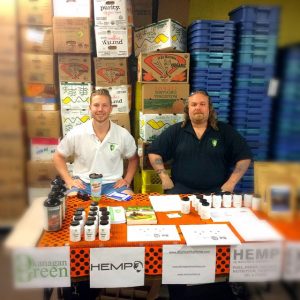 What is our hemp-related business? At the moment, we are providing hemp seed and its oil in various forms. Our house brand is Okanagan Green Hemp Foods, with seeds, bottles of oil, oil capsules, and enhanced protein capsules. We also carry third-party products from around British Columbia to local Okanagan companies. We try to support Canadian businesses where at all possible, but have also reached out to Hippie Butter from Texas. They have been a very supportive company in the growth of our company.

Do you have other businesses? Brynn and Jason have been in a part of Kelowna’s local entertainment industry for more than a combined 25 years. They own and operate multiple venues under Flashbacks Entertainment. They are active members of the local business community, providing the Okanagan generations with an emphasis on quality, customer service, community participation, and safety.

Brynn is a firefighter and a key training figure for recruits for the community Volunteer Fire Department. He also is the truck operator, and the Hazmat and Community Safety Coordinator. 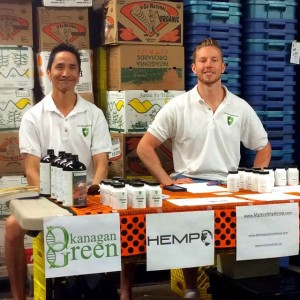 Darrin thrives on a world of self-improvement and education. He is active in social activism and made a couple attempts at local politics. He has helped run a business college, built homes, set up community computer labs for the local First Nations community, and managed restaurants. Life is an experience, and he gets in as much as you can. He is currently managing Bluetail Sushi & Bistro.

A day in the life of the Mariceutical boys. Jason and Brynn take their daily peaceful drive along the Okanagan Lake, while over-night sales orders queue up on the shop computer. The email sits patiently when the timer sets off the drizzle of hemp coffee. The aroma fills the bay, providing inspiration and vigor to set their minds to the latest developments, their vision of the future providing point-by-point footing to the next unexpected development. Darrin arrives, coffee mug in hand and grin on his face. He gets to work on the next label, or perhaps the graphic design upcoming advertising. He adds some Facebook posts, flings up some Tweets, and Instagram a few of last night’s sunset photos. Then it’s time to read up and study. Lately, it’s been on marketing and advertising, but it can range from neurology to politics or the economy to heath food and pharmaceuticals.

Brynn updates Jason on the latest going-on with inquiries and sales. At ten o’clock, Jason heads back to Flashbacks while Brynn prepares the shipments for the day. Both private and wholesale orders are packaged, weighed, labeled and then picked up by couriers and Canada Post. Before an afternoon meeting, he reviews the content he put together for Medical Review TV with William Shatner. This was not something foreseen in the building of the company, but what an incredible opportunity!

Mariceuticals has a passion for all-natural hemp. It builds up our health, provides environmental benefits, and is a clean, green product. We believe that by growi 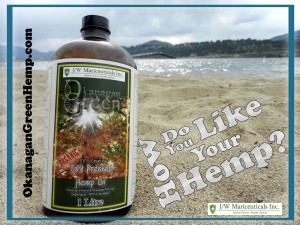 ng the hemp industry, we will be empowering Canada’s farm communities. A hemp-based economy can push back against the harm currently done with the petroleum-based one. We want to turn those tar sands workers into hempreneurs.

What are people saying about the Mariceutial boys?

At first? Trepidation. Hemp still has the unfair link to cannabis, thanks to laws from the 1920s that made these two illegal to grow thanks to some imaginative lobbying from the petroleum and wood pulp industries. Industrial hemp was de-prohibited in the early 1990s, but the mentality didn’t jump on the train. However, once we gain someone’s attention, the interest grows. How could it not when the hemp seed provides so much to gain and nothing to lose? We can see the inquirer’s change, often looking forward to our next public appearance at trade shows or pop-up shop at a local market. Spreading the word pays off.

Who are you talking to, or the audience you wish to influence?

Anyone who cares about their health, which is a surprising array of people from teens to pensioners. We realize the hemp seed will benefit the Baby Boomers as that generation, you know, ‘gets to that age’. But we also want the upcoming generations to start and maintain a healthy lifestyle, which is no easy feat when competing against the food industry’s marketing power.

Deciphering a healthy lifestyle is no simple feat in an age of information and spin. The science is out there, but the truth is often obscured by industry interests. Getting this public will require some intense awareness campaigns, and this may require facing a political arena of hostile and well-backed opposition. But as the saying goes, “The truth will set you free.”

Brynn helps with Habitat for Humanity in his off-time. Darrin has been active in the community for over a decade. He spearheads a group called Community Minds, dedicated to improve lives through improving the environment. What constitutes an environment is more complex than hugging a tree, however.

Whatever affects our senses, thoughts and emotions are all a part of our environment. Darrin started off researching mental health, realizing how we perceive our world will trigger the traits behind our behaviour and beliefs. While a diet of pharmaceutical prescriptions does its repairs, the side effects can be drastic and, at times, unnecessary. What our drugs can do, many foods, spices and herbs can do just as well. Hemp is an excellent representation of this.

But change requires more than that. It requires understanding of how our politics affect our economy, which affects the availability of straight-forward information and healthy food. Understanding that information requires knowing how to decipher the spin from reality, then knowing where to find what you seek amidst the clutter of convenience.

Amidst all this madness, one must then understand that a healthy lifestyle requires a calm attitude as the stresses push in. If approached properly, you face being an economic heretic because you will be stepping away from the consumerist lifestyle. It’s an odd thing to say from an incorporated company, but it is possible to run a socially responsible business. There are many aspects that align J/W Mariceuticals with an activist mentality.

Books that inspire you?  That’s a tough one. Darrin has a library of over 400 books on a ton of topics.

For food and health, The Hundred-Year Lie by Randall Fitzgerald was an eye-opener on the processed food industry, later reinforced by Michael Moss’s Salt Sugar Fat. Recently, Altered Genes, Twisted Truth by Steven M. Druker provided some much-needed information on genetically modified organisms and it ain’t pretty. The news doesn’t get any better in Rick Smith and Bruce Lourie’s Slow Death by Rubber Duck, revealing the chemical stew we’re immersed in on a daily basis.

This truth came up when researching food additives and chemicals, pharmaceuticals and medical devices, and GMOs. Tying it up, Fran Hawthorne gives an in-depth examination with Inside the FDA, with Marion Nestlé’s Food Politics as a great companion read. Understanding how a federal institution can be warped by economic forces, the scope of the problem broadened.

Our daily mantra is?

Wake up. Save the world.

Why Hemp? Your motivation to be involved?  Our goal at J/W Mariceuticals is to develop market and sell top quality Canadian Hemp-based products. With some research, we sought out the top grower, laboratories, and suppliers. We have been in contact with food production, cosmetic, aromatherapy and nutraceutical facilities, keeping in touch with what’s in development. While the hemp seed is our foundation, we will leverage the hemp industry, seed, stalk and all, to expand into further markets. When something has use in health, cosmetics and construction, plus replaces all petroleum-based products, it deserves some respect and attention. We hope to bring that attention.

Your ONE MESSAGE to the world about Hemp, save our Planet, Farmers support, Hemp activism or otherwise pertaining to your message to the world?

We are at the forefront of revamping industry’s harm to us and the environment towards a truly sustainable, functioning society. What’s not to be excited about?

Would you like to connect to the Mariceutical boyz in British Columbia Canada… they are very social!!